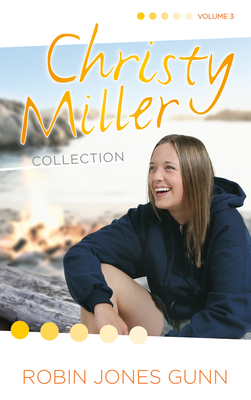 This is book number 3 in the The Christy Miller Collection series.

Bestselling author Robin Jones Gunn packs each one with enough action, romance, and drama to keep you reading and wanting more. It all starts the summer Christy vacations on a California beach and meets two friends who change her life forever. But after moving across the country with her family, Christy must begin her sophomore year of high school uncertain where she’ll fit in. A red-headed new best friend, a try at cheerleading, a job at a pet store, and expectations for the prom fill Christy’s high school years with a string of laughter-and-tears moments. Fireball Katie keeps everyone guessing what she’ll do next, and surfer Todd keeps showing up while popular Rick has determined to get her full attention! As these memorable years unfold, Christy and her God-loving friends find out what it means to be a “peculiar treasure.” Follow Christy Miller as she stays true to her identity in Christ, drawing closer to God for help in realizing her dreams and dealing with her disappointments.

What is a true friend? Christy Miller knows she has two of them: Todd and Katie. To show how much she appreciates them, she writes to Todd, who’s off surfing in Hawaii, and she agrees to join the ski club with Katie…even though she’s scared of skiing! Fortunately, Christy and Katie can laugh as they bumble their way around the bunny slopes at Lake Tahoe. But Christy finds herself caught between new friends and her loyalty to Katie. Will Christy find a way to be a true friend when it counts most? And will she ever hear from Todd?

It’s Christmastime, and Christy Miller has so much going on: family time, work, and maybe, just maybe, going to the Rose Bowl Parade with a bunch of friends. If only she could answer Uncle Bob’s tough questions. Todd’s buddy Doug gives her some insight, and she starts to appreciate him in a whole new way. Rick Doyle shows up again...but is he pursuing Christy or the cutest elf at the mall? Through it all, will Christy find someone special to count the stars with?

It’s summer, and that means the beach and other adventures. And Christy Miller’s best friend, Katie, is always full of ideas. They’ll be camp counselors! But when Katie can’t go, Christy is bewildered and overwhelmed by her fifth-grade girls, who have boundless energy for anything except what Christy wants them to do. Do they even hear a word she says? Soon they’re playing matchmaker between Christy and Jaeson, a handsome counselor...and he doesn’t seem to mind. When Christy’s seventeenth birthday arrives later in the summer, just what will she be wishing for?

“The Christy Miller series was actually born when a group of thirteen-year-olds challenged me to write a novel. I’d been questioning the content of their favorite books when they said, ‘Why don’t you write a book for us?’ I told them no, I only wrote picture books. But they persisted: ‘How hard could it be? We’ll even tell you what to write! We want a love story with teenagers at the beach.’ And there you go. Summer Promise first released seventeen years ago and is now translated into five languages. I continue to hear from readers all over the world, many girls saying that they gave their life to Christ after reading Summer Promise. I love that!”
—Robin Jones Gunn

Robin Jones Gunn is the bestselling, award-winning author of sixty books with 2.75 million copies sold worldwide. She began writing novels for teens, including the Christy Miller series, after serving in full-time youth ministry for over twenty years with her husband, Ross. She has taught at writers’ conferences and been a guest speaker for a variety of groups in settings from Hawaii to Helsinki. Robin and Ross have been married for twenty-eight years and have a grown son and daughter. They live near Portland, Oregon.