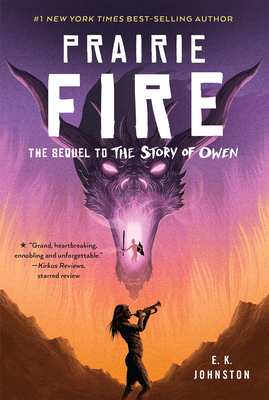 Seventeen-year-old dragon slayer Owen and his bard, Siobhan, are set to join the Oil Watch, the international organization charged with protecting the world from the vicious, carbon emission-eating creatures.

Owen is destined by birth to carry on his family's heroic legacy, but what makes him different is that he doesn't enlist alone. His two closest friends stand with him shoulder to shoulder. Steeled by success and hope, the three are confident in their plan. Still, try as they might, Owen and his friends may not make it. Not all the way. Not all together.

Readers who love alternate history will devour this quirky, clever tale of friendship, sacrifice, and adventure.

E. K. Johnston is the #1 New York Times best-selling author of several YA novels, including Star Wars: Ahsoka and A Thousand Nights. She is also a trained forensic archaeologist, has lived on four continents, and decorates cupcakes in her spare time. These days, she calls Stratford, Ontario, home.

"Fantasy fans will love returning to an alternate world in which the armed forces slay dragons. History fans will get a kick out of the way Johnston intermixes actual U.S. and Canadian history with a dragon-friendly story line. Eco-aware fans are unlikely to miss the underlying sentiment that oil brings nothing but trouble in both titles. . . . A fantasy YA novel that steers clear of love triangles, teen angst, and a tidy ending is hard to come by; Prairie Fire and its prequel are must-haves."―School Library Journal

"Johnston's solid writing will keep [readers] engaged with her smooth blend of fantasy and realism, all anchored by Siobhan's determined personality and her solid friendship with Owen and his team." ―Booklist

"Johnston isn't afraid to write for a world where happy endings are rare, but there is such grace and dignity that heartbroken readers will likely forgive what was almost an inevitable tragic ending for some characters. Knowledge of the first volume will go a long way in adding nuance and background to the characters; more importantly, readers are likely to want to go back just to absorb as much of Owen and Siobhan's story as they can."―The Bulletin of the Center for Children's Books

"Siobhan is a flawed but strong and likable heroine who finds her way in the world. Her story is one of finding strength in spite of multiple challenges. . . . One strength of this story is the great use of sensory detail―even when one is being put into an alternative reality, the sensory details of dragons' wings flying over help make these scenes more believable. This story is a must for those who loved the first book and want to continue with the story."―VOYA

"The penultimate scene of a Chinook attack that assures Owen's elevation to lasting fame may come as a jolt, but it is Siobhan's transformation into a star in her own right that will stay with readers."―The Horn Book Magazine


Praise for E.K. Johnston's The Story of Owen:

★ "In an alternate world where humans and dragons battle over fossil fuels, the tale of one slayer and his bard becomes a celebration of friendship, family, community and calling."—Kirkus Reviews, Starred Review

★ "Siobhan's narration sings thanks to her dry wit, intelligence, and ability to see the inherent musicality of life, while also commenting on the unreliability of history (and storytelling) and the power of a community to rally to save itself." ―Publishers Weekly, Starred Review

"nothing short of epic." ―The Horn Book Magazine