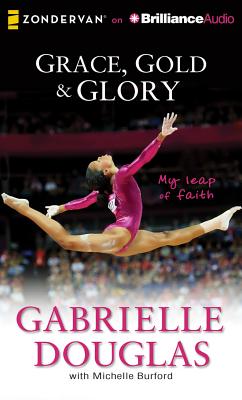 By Gabrielle Douglas, Haleakala Wilson (Performed by), Michelle Burford (With)
Email or call for price
Out of Print

Gabrielle Douglas, in her own words.

Following her amazing performances in both the team and all-around competitions, US gymnast and two-time Olympic gold medalist Gabrielle Douglas became one of the biggest names to emerge from the 2012 London games. But before she received international acclaim, she was a young girl growing up with a host of challenges before her.

Almost no one would have guessed this child born in 1995 with a rare blood disorder would go on to make Olympic history. Growing up in a family with tight financial constraints but a wealth of love, Gabrielle quickly learned that if she wanted her dreams to become reality, she would need support and an immense trust in God. Then came the strain her lessons placed on the household budget, the feeling she didn't always belong, multiple injuries, and questions that led her to consider leaving gymnastics forever. The only thing pulling her through was the knowledge God had a plan, and her family was there to help her execute it--whatever that plan might contain.

In this personal autobiography, Gabrielle looks beyond the lessons she's learned at the gym and shares the leaps of faith she has needed to make throughout her life. Grace, Gold & Glory tells the incredible true story of a girl who overcame tremendous odds to bring glory to her team, her country, and her Creator.

Following her amazing performance in the 2012 London Olympics, US gymnast Gabrielle Douglas made history as the first African American to win the all-around competition, in addition to winning gold as a crucial member of the women's gymnastics team. But if it wasn't for several key moments--and people--in Gabrielle's life, none of this would have ever been possible. In this autobiography, Gabrielle tells her story of faith, perseverance, and determination, proving you can reach your dreams if you trust in God and let yourself soar.