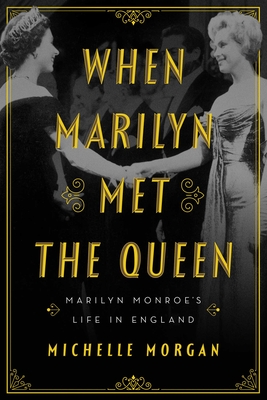 In July 1956, Marilyn Monroe arrived in London—on honeymoon with her husband Arthur Miller—to make The Prince and the Showgirl with Sir Laurence Olivier. It was meant to be a happy time . . .

"I am dying to walk bare-headed in the rain. I think England sounds adorable.”—Marilyn Monroe

Marilyn would work during the day at Pinewood Studios, in Iver Heath, while Arthur would write. Then, in the evening, the couple would be able to relax together in their private English country cottage.

But the cottage was a mansion, in Englefield Green, and Marilyn, used to living in tiny hotel rooms and apartments, felt herself being watched. She was, by several of owner Lord Drogheda's servants, who were selling stories to the papers.

And when filming began, all did not go as hoped. Over time, Marilyn grew to hate Olivier; the feeling was mutual.

Marilyn found herself a curiosity for the frequently hostile British press. She took solace in bike rides in Windsor Great Park, in small acts of kindness from members of the public, and in a growing fascination with Queen Elizabeth, whom she longed to meet—and eventually did.

Michelle Morgan is the author or co-author of nine books about Marilyn Monroe, including Marilyn Monroe: Private and Confidential and The Girl: Marilyn Monroe, The Seven Year Itch, and the Birth of an Unlikely Feminist. Michelle lives in England.

Praise for When Marilyn Met the Queen:

"The real strength of Morgan’s book is her ability to place four months in a famous woman’s life under a microscope: who she met, what she wore, how she felt. Monroe’s genuine excitement about meeting the Queen and her endless friendliness to the fans who loved her are endearing. What emerges is not only a close-up of Marilyn but also a picture of someone who, like many of us, romanticizes people and places only to find disappointment."

"What is new here is not only the subtlety of this account, exploring the nuances of American and English culture, but also the comprehensive readings of how people — on set, in the streets, in chance encounters — responded to Monroe, including those who thought she was no big deal....This biography has a coda, a moving portrayal about how those who met and worked with Monroe on and off the set of 'The Prince and the Showgirl' reacted to her death. This deft addition to the story of events that occurred over only four months elevates 'When Marilyn Met the Queen' into a narrative of much greater significance than many biographies that deal with a whole life."
— The New York Sun

"Fans of Marilyn Monroe and the Golden Age of Hollywood will enjoy this slice of the actress’s life that she spent in England in 1956 ... While covering a relatively short period between July and November, the book is chock full of history, personal anecdotes, and beautiful details ... While highly detailed, this book is an effortless read that will take readers back in time and make them want to watch their favorite Marilyn Monroe film ... An enjoyable peek into the past that provides insight into Monroe’s life and the zeitgeist of 1950s England. Film buffs and fans of the era will enjoy Morgan’s biography, as will any reader interested in Monroe and her enduring legacy."
— Library Journal

"This compelling portrait of Marilyn Monroe reveals the layers of her private self. Michelle Morgan proves that the star was much more than a decorative blonde.”
— Lyndsy Spence, author and film journalist

"This was a good read, especially for anyone interested in the heyday of Hollywood with all it's dirty little secrets.”
— The New York Journal of Books

"Todd's life was an exciting one, and Morgan brings it to life very well on the page, making the book one to be devoured in just a couple of sittings."
— The Motion Pictures

“Well worth your time. It's a very enjoyable and informative read that I found hard to put down."
— The Hollywood Review

"This candid and often surprising study of the screen legend provides another view of her."
— Red Magazine

"A touching portrayal of Monroe in her more private moments.”
— Empire Magazine

"This is a great book for dipping into . . . The cases themselves are written engagingly and with appealing dramatization of key events.”
— Crime Review