The Nazis Knew My Name: A Remarkable Story of Survival and Courage in Auschwitz (Hardcover) 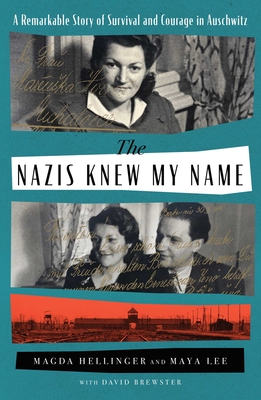 The “thought-provoking…must-read” (Ariana Neumann, author of When Time Stopped) memoir by a Holocaust survivor who saved an untold number of lives at Auschwitz through everyday acts of courage and kindness—in the vein of A Bookshop in Berlin and The Nazi Officer’s Wife.

In March 1942, twenty-five-year-old kindergarten teacher Magda Hellinger and nearly a thousand other young women were deported as some of the first Jews to be sent to the Auschwitz concentration camp.

The SS soon discovered that by putting prisoners in charge of the day-to-day accommodation blocks, they could deflect attention away from themselves. Magda was one such prisoner selected for leadership and put in charge of hundreds of women in the notorious Experimental Block 10. She found herself constantly walking a dangerously fine line: saving lives while avoiding suspicion by the SS and risking execution. Through her inner strength and shrewd survival instincts, she was able to rise above the horror and cruelty of the camps and build pivotal relationships with the women under her watch, and even some of Auschwitz’s most notorious Nazi senior officers.

Based on Magda’s personal account and completed by her daughter’s extensive research, this is “an unputdownable account of resilience and the power of compassion” (Booklist) in the face of indescribable evil.

Magda Hellinger was deported to Auschwitz on the second transport from Slovakia in March 1942, at the age of twenty-five. She was one of the very few to survive over three years in concentration camps. During her time in Auschwitz-Birkenau she held various prisoner functionary positions and had direct dealings with prominent SS personnel, using her unique position to save hundreds of lives.

Maya Lee is the daughter of Magda Hellinger. She is an accomplished businesswoman and fundraiser with several nonprofit organizations. After coauthoring an autobiography of her Holocaust-survivor husband, she encouraged her mother to document her own story. Maya subsequently conducted wide-ranging research to fill out her mother’s story. The Nazis Knew My Name is the result.

David Brewster is a Melbourne-based freelance writer whose work is centered on helping memoirists tell their stories. David’s published works include Scattered Pearls, cowritten with Sohila Zanjani, and Around the Grounds, cowritten with Peter Newlinds.

"For too long, the stories of people like Magda, who were forced to make unthinkable choices, have remained untold. Unsentimental and filled with detail of her courageous dealings with notorious Nazis this is an important book that provides a rare insight into everyday life in the hellish structure of concentration camps. This thought-provoking book is a must-read for anyone interested in the Holocaust." —Ariana Neumann, New York Times bestselling author of When Time Stopped

“[A] compelling and seamless portrait of a young woman who managed to sur­vive and save others through cunning bravery and compassionate leadership… an extraordinary portrait of one woman who fought for others in the midst of unimaginable horror.” —BookPage (starred review)

“Hellinger has written an important perspective of the Holocaust, of a kind that we rarely see. A standout memoir that will draw the interest of readers of World War II history and women’s memoirs or biographies.”—Library Journal (starred review)

“Magda’s own words, completed by her daughter’s copious research, create an unputdownable account of resilience and the power of compassion.” —Booklist

“This memoir provides a different view than most of life in the notorious Auschwitz-Birkenau concentration camps. As a result, it adds to our collective knowledge of the Holocaust.” —San Diego Jewish World

“'This,’ Lee writes in her dedication, ‘is the story [Magda] always wanted to tell.’ It’s one worth hearing.”—The Forward