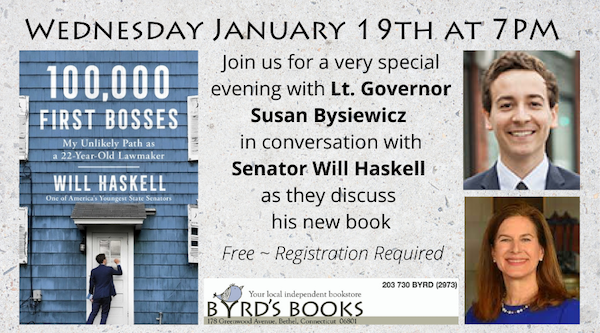 Please join us for a very special author event as Byrd's Books welcomes Lt. Governor Susan Bysiewicz in conversation with Senator Will Haskell as they discuss his new book, 100,000 First Bosses: My Unlikely Path as a 22-Year-Old Lawmaker. This is a free virtual event on zoom, registration required and we will have signed copies of the book. 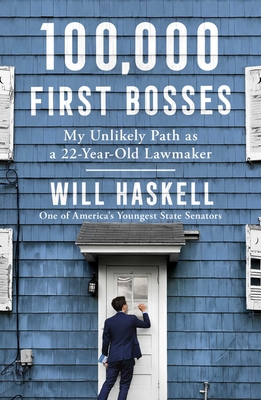 President Obama left office with these parting words for Americans: "If you're disappointed by your elected officials, grab a clipboard, get some signatures, and run for office yourself." Twenty-two-year-old Will Haskell decided to do just that. If he ran for office and won, he would become the youngest state Senator in Connecticut history. For years, Haskell's hometown had reelected the same politician who opposed passing paid family leave, fought increases in the minimum wage, and voted down expansions of voting rights. Haskell's own vision for Connecticut's future couldn't be more different, and he couldn't stand the idea of an uncontested election. In 2018, he would be a college grad looking for his first job. Why not state Senator? When Haskell kicks off his campaign in the spring of his senior year, he's an unknown college kid facing a popular incumbent who's been in office for over two decades--as long as Haskell's been alive. Haskell's campaign manager is his roommate and his treasurer is his girlfriend's mom. He doesn't have any professional experience. But he does have a powerful message: there's no minimum age to being on the right side of history. Six months later, Haskell's shocking upset victory gives him a historic seat in the state Senate and the responsibility to serve the 100,000 constituents in his district. Like any first job, his first term as a legislator is filled with trial and error. Creating a program that funds free tuition at Connecticut's community colleges--nice work. Falling asleep on the senate floor--needs improvement. In the tradition of Pete Buttigieg's Shortest Way Home and Greta Thunberg's No One Is Too Small to Make a Difference, 100,000 First Bosses is the story of how one twentysomething candidate waged the campaign of his young life, fought for change at the state capitol, and proved that his generation is ready to claim a seat at the table.

In 2018, Will Haskell was elected to represent his hometown in the Connecticut State Senate. Just a few months after graduating from college, he and his roommate-turned-campaign manager unseated a Republican incumbent who had been in the legislature for longer than Will had been alive. Their campaign activated an army of young volunteers who were energized by the fight to end gun violence, and together they broke a tie in the Senate by flipping the district Blue. In the Senate, Will serves as the Chair of the Transportation Committee and the Vice Chair of the Government Administration and Elections Committee. His spent his first term focusing on college affordability, transportation improvements, and voting rights. In 2019, he helped create Connecticut's free community college program, so that every high school graduate has an opportunity to pursue a degree. He lives in Westport, Connecticut, and is still dating his lab partner from high school physics. 100,000 First Bosses is his first book.

As a state representative in the Connecticut General Assembly, representing the towns of Middletown, Middlefield, and Durham, Bysiewicz wrote legislation to ban dangerous “drive-through” mastectomies and ensure that women being treated for breast cancer had proper care. She also fought political patronage and wrote the law to ban lobbyists from giving gifts to legislators.

As a business lawyer and a job creator, she has helped over sixty companies access millions of dollars in capital, expand their businesses, and create thousands of jobs in Connecticut.

Lt. Gov. Bysiewicz was raised the proud granddaughter of immigrants who came to Connecticut from Poland and Greece with nothing but hopes for a better future. After many years of factory work, they saved enough to buy a farm in Middletown that became Bysiewicz's childhood home. Growing up and working on the farm, she and her siblings learned the values of hard work, education, and persistence.

Bysiewicz and her husband David Donaldson reside in Middletown.

We will have signed copies