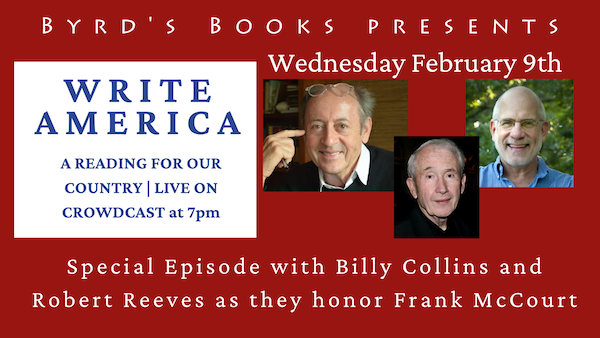 BILLY COLLINS is the author of twelve collections of poetry including The Rain in Portugal, Aimless Love, Horoscopes for the Dead, Ballistics, The Trouble with Poetry, Nine Horses, Sailing Alone Around the Room, Questions About Angels, The Art of Drowning, and Picnic, Lightning. He is also the editor of Poetry 180: A Turning Back to Poetry, 180 More: Extraordinary Poems for Every Day, and Bright Wings: An Illustrated Anthology of Poems About Birds. A former Distinguished Professor at Lehman College of the City University of New York, Collins served as Poet Laureate of the United States from 2001 to 2003 and as New York State Poet from 2004 to 2006. In 2016 he was inducted into the American Academy of Arts and Letters. His latest book of poems is WHALE DAY

ROBERT REEVES is the author of two critically acclaimed novels, both published by Crown, as well as short fiction, essays, and literary criticism. Kirkus Review hailed Doubting Thomas as "a zesty, classy original," and Patricia Holt of the San Francisco Chronicle called Peeping Thomas "funny, disturbing, and brilliant." Reeves, director of the Southampton Writers Conference, has also taught writing at Harvard and Princeton.

Frank McCourt (1930-2009) was born in Brooklyn, New York, to Irish immigrant parents, grew up in Limerick, Ireland, and returned to America in 1949. For thirty years he taught in New York City high schools. His first book, Angela's Ashes, won the Pulitzer Prize, the National Book Critics Circle Award, and the Los Angeles Times Book Award. In 2006, he won the prestigious Ellis Island Family Heritage Award for Exemplary Service in the Field of the Arts and the United Federation of Teachers John Dewey Award for Excellence in Education.

Whale Day: And Other Poems (Paperback)

The Southampton Review - Volume 3 No.1

A very special edition of the Southampton Review- click the book title to see the full line-up.