Write America: Garry Trudeau and Jules Feiffer- in conversation about the art of cartooning 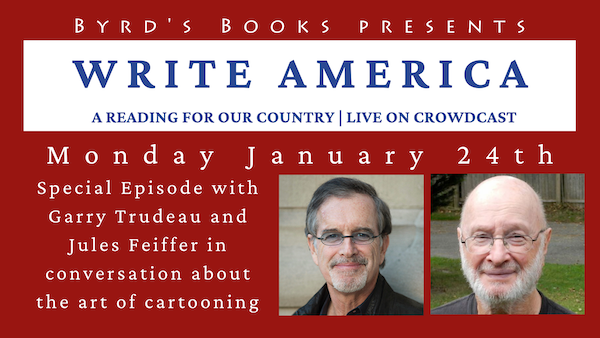 Join us for the forty-fourth episode of Write America featuring Garry Trudeau and Jules Feiffer as they discuss the art of cartooning. For this very special episode, each will discuss their works- intimating how the deep divisions in the country may be healed by the quiet power of art.

GARRY TRUDEAU has been drawing his Pulitzer Prize-winning comic strip for more than forty years. In addition to cartooning, Trudeau has worked in theater, film, and television. He also has been a contributing columnist for the New York Times op-ed page and later an essayist for Time magazine. He is a fellow of the American Academy of Arts & Sciences. He lives in New York City with his wife, Jane Pauley. They have three grown children.

JULES FEIFFER has won a number of prizes for his cartoons, plays, and screenplays, including the Pulitzer Prize for editorial cartooning. Among the books he’s illustrated for children are The Phantom Tollbooth, Some Things Are Scary, and in collaboration with his daughter Kate, Henry the Dog with No Tail, and No Go Sleep. He is the author and illustrator of Bark, George, I Lost My Bear, Meanwhile, and The Man in the Ceiling.

LEWSER!: More Doonesbury in the Time of Trump (Paperback)