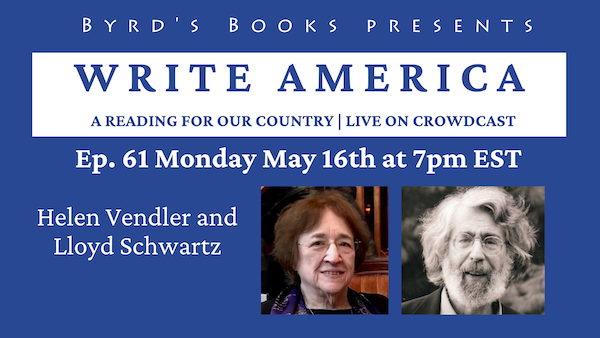 Join us for the sixty-first episode of Write America on Monday May 16th featuring Helen Vendler and Lloyd Schwartz (new line-up!) as they read and discuss their works- intimating how the deep divisions in the country may be healed by the quiet power of art.

HELEN VENDLER has written books on Emily Dickinson, W. B. Yeats, Wallace Stevens, John Keats, and Seamus Heaney. She has been a professor of English at Harvard University since 1984; from 1981 to 1984 she taught alternating semesters at Harvard and Boston University. In 1990 she was appointed the A. Kingsley Porter University Professor, the first woman to hold this position. She has also taught at Cornell University, Swarthmore and Smith Colleges, and Boston University. She married (and later divorced) the philosopher Zeno Vendler, with whom she had one son. In 1992 Vendler received an honorary Litt. D. from Bates College.

Vendler earned an A.B. in chemistry at Emmanuel College. She was awarded a Fulbright Fellowship for mathematics before earning her Ph.D. in English & American Literature from Harvard. She has also been a judge for the Pulitzer Prize and the National Book award, in poetry.

In 2004, the National Endowment for the Humanities selected Vendler for the Jefferson Lecture, the federal government's highest honor for achievement in the humanities.Her lecture, "The Ocean, the Bird, and the Scholar",  used poems by Wallace Stevens to argue for the role of the arts (as opposed to history and philosophy) in the study of humanities.

Vendler delivered the 2000 Warton Lecture on English Poetry.  She is a member of the Norwegian Academy of Science and Letters.

LLOYD SCHWARTZ is the Frederick S. Troy Professor of English Emeritus at the University of Massachusetts Boston, the longtime classical music critic for NPR’s Fresh Air, scholar and editor of the works of Elizabeth Bishop, and the current Poet Laureate of Somerville, MA. Among his awards are NEA and Guggenheim Foundation fellowships for his poetry and a Pulitzer Prize for Criticism. His poems have been selected for

The Ocean, the Bird, and the Scholar: Essays on Poets and Poetry (Paperback)

Who's on First?: New and Selected Poems (Phoenix Poets) (Paperback)

Music in and on the Air (Paperback)