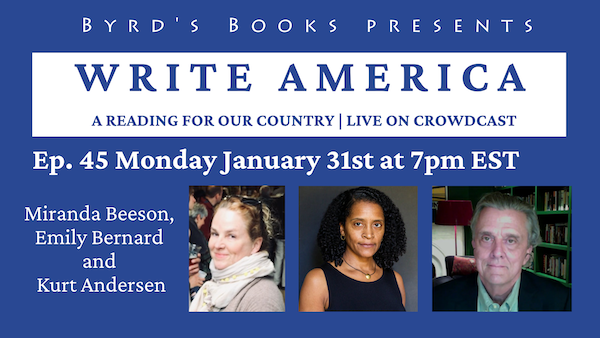 Join us for the forty-fifth episode of Write America featuring Miranda Beeson, Emily Bernard and Kurt Andersen as they read and discuss their works intimating how the deep divisions in the country may be healed by the quiet power of art.

This event is free to attend, Registration required. Your purchase of a book helps support this program - see below for book details.

MIRANDA BEESON'S  poems appear all over, including Barrow Street, The Southampton Review, Great Weather for Media, & Melville House's Poetry After 9-11: An Anthology of New York Poets. She is the author of Ode to the Unexpected from novelist Peter Cameron's Shrinking Violet Press & The Jones of It, a recent finalist for the Tomaž Šalamun Prize. Catch & Release, her collection of sonnets is forthcoming from dancing girl press in Summer 2022. Along the way, she's been the recipient of Palette Poetry's Spotlight Award, & a Jody Donohue Poetry Prize. An ardent advocate for Arts in Education, the New York State Council on the Arts supported her efforts to inspire a generation of young poets (K-12), before she joined Stony Brook University where she enthusiastically teaches creative writing & literature to a pack of undergraduates. Her manuscript WILDLIFE is looking for a publisher, having been a finalist & semi-finalist for far too long. She's always at work on the—next one. She MFA/ed at Stony Brook Southampton & lives on the North Fork & in

EMILY BERNARD was born and grew up in Nashville, Tennessee, and received her PhD in American studies from Yale University. She has been the recipient of grants from the Ford Foundation, the NEH, and a W. E. B. Du Bois Resident Fellowship at Harvard University. Her essays have been published in journals and anthologies, among them The American Scholar, Best American Essays, and Best African American Essays. She is the Julian Lindsay Green and Gold Professor of English at the University of Vermont. https://www.emilybernard.com/

KURT ANDERSEN is the bestselling author of Evil Geniuses, Fantasyland and the novels True Believers, Heyday and Turn of the Century, among other books. He contributes to The New York Times and was host and co-creator of Studio 360, the Peabody Award-winning public radio show and podcast. He also writes for television, film, and the stage. Andersen co-founded Spy magazine, served as editor in chief of New York, and was a cultural columnist and design critic for Time, New York and The New Yorker. He graduated from Harvard College and lives in Brooklyn. https://www.kurtandersen.com/about

Evil Geniuses: The Unmaking of America: A Recent History (Paperback)