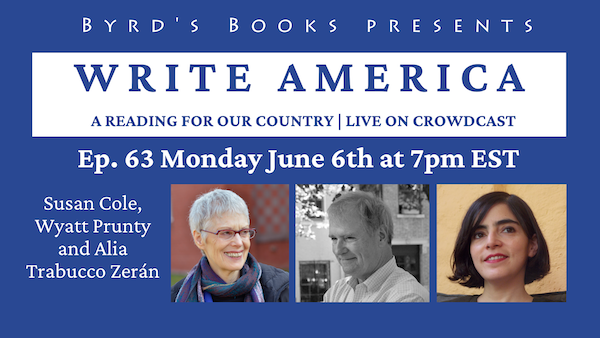 Join us for the sixty-third episode of Write America on Monday June 6th featuring Susan Cole, Wyatt Prunty and Alia Trabucco Zerán as they read and discuss their works- intimating how the deep divisions in the country may be healed by the quiet power of art.

SUSAN COLE: is a professor of English and Director of the Concentrations in Creative Writing and Dramatic Studies at Albertus Magnus College. She has a Ph.D. in 16th and 17th century literature from Harvard University where she met Roger Rosenblatt at our first graduate student party when everyone else was drinking a potent punch and Roger was sitting at a piano playing a song that immediately drew her attention away from the punch bowl.

Her previous publications include: The Absent One; Directors in Rehearsal: A Hidden World; Playwrights in Rehearsal: The Seduction of Company (Routledge, 2001); Missing Alice: In Search of a Mother's Voice (Syracuse UP, 2007); Serious Daring: The Fiction and Photography of Eudora Welty and Rosamond Purcell (The University of Arkansas Press, 2016).
Her new book, They Made a List: A Memoir Beyond Memory, is published by San Diego State University Press.  Susan Letzler Cole lives in New Haven with her husband, David Cole, a playwright and author of works on theatre.

WYATT PRUNTY is the author of nine collections of poetry. His first poetry collection, Domestic of the Outer Banks, appeared in 1980. The Times Between; What Women Know, What Men Believe; Balance as Belief; The Run of the House; Since the Noon Mail Stopped; Unarmed and Dangerous: New and Selected Poems; The Lover’s Guide to Trapping; and Couldn’t Prove, Had to Promise have subsequently been published by The Johns Hopkins University Press. His critical work, “Fallen from the Symboled World”: Precedents for the New Formalism, is available from Oxford University Press. He has also served as general editor of the Sewanee Writers’ Series and currently serves as editor of The Johns Hopkins Poetry and Fiction Series. He has taught at The Johns Hopkins Writing Seminars, Louisiana State University, Washington and Lee University, and Sewanee, where he is the Ogden P. Carlton Professor of Literature. He is a recipient of Guggenheim, Rockefeller, Johns Hopkins, and Brown Foundation fellowships. He has served as Chancellor of the Fellowship of Southern Writers and is the Founding Director of the Sewanee Writers’ Conference and the Tennessee Williams Fellowship program.

Alia Trabucco Zerán was born in Chile in 1983. She was awarded a Fulbright scholarship for a master's in creative writing in Spanish at New York University, where she wrote her debut novel La resta (The Remainder- Coffee House Press, 2019). La resta won the prize for Best Unpublished Literary Work awarded by the Chilean Ministry of Cultures, and was shortlisted for the Booker International Prize 2019. It has been translated into several languages. Her second book is Las Homicidas (When Women Kill - Coffee House Press, April 2022), a non-fiction book described as a "thrilling fusion of true crime and investigative memoir" (Times Literary Supplement), where she challenges archetypes associated with female violence. Both books have been translated by Sophie Hughes. Her third book, the novel Limpia (Clean - forthcoming) recently won the Best Literary Work Award by the Chilean Ministry of Cultures (2021). It will be published in November 2022.

As We Were Saying: Sewanee Writers on Writing (Paperback)