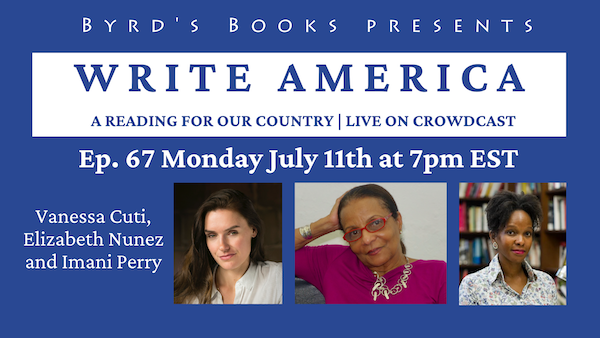 Join us for the sixty-seventh episode of Write America on Monday July 11th featuring Vanessa Cuti, Elizabeth Nunez and Imani Perry as they read and discuss their works- intimating how the deep divisions in the country may be healed by the quiet power of art.

VANESSA CUTI's fiction has appeared or is forthcoming in The Best American Short Stories 2021, The Kenyon Review, AGNI, West Branch, Indiana Review, Cimarron Review, The Cincinnati Review, Shenandoah, The Rumpus and others. She received her MFA from Stony Brook University and lives in the suburbs of New York. The Tip Line, her debut novel, is forthcoming from Crooked Lane Books in April 2023.

ELIZABETH NUNEZ immigrated to the US from Trinidad after completing high school there.  Winner of an American Book Award and a Hurston Wright Legacy Award, she is the author of a memoir and ten novels, four of them selected as New York Times Editors Choice. She is the co-founder with John Oliver Killens of the National Black Writers Conference and executive producer of the NY Emmy-nominated CUNY-TV series Black Writers in America. Nunez has served on the jury for national and international literary prizes/awards, including the international Dublin IMPAC Literary prize, the National Endowment for the Humanities Award, the Ernest Gaines Literary prize and the Fulbright Award for Creative Writing.  Her latest novel NOW LILA KNOWS will be published in spring 2022. Nunez is a Distinguished Professor at Hunter College, the City University of New York.

IMANI PERRY is the Hughes-Rogers Professor of African American Studies at Princeton University. Perry is the author of Looking for Lorraine: The Radiant and Radical Life of Lorraine Hansberry, winner of the 2019 Bograd-Weld Biography Prize from the Pen America Foundation. She is also the author of Breathe: A Letter to My Sons; Vexy Thing: On Gender and Liberation; and May We Forever Stand: A History of the Black National Anthem. Perry, a native of Birmingham, Alabama, who grew up in Cambridge, Massachusetts, and Chicago, lives outside Philadelphia with her two sons.

South to America: A Journey Below the Mason-Dixon to Understand the Soul of a Nation (Hardcover)